Another day in investing paradise, or hell? It depends on how you look at it. Volatility in the last few weeks has been absolutely off the charts. Blue chips moving a few percent up, followed by a similar move downwards the next day, just to be repeating the same pattern a few days later. It is those times when you realize that short-term the market is nothing but a casino: bet on red one day and black the next. Does it have any relevance to investing? Far from it, but even despite all the advice from the greats such as Warren Buffet, Benjamin Graham, or any other value investor, it is easier to side with George Soros and opt for a speculative approach in lieu of regarding the share market as an investment platform. But …

Checking the market ever day or hour is usually far from relaxing. If the market moves affect your mental wellbeing, it might be advisable to refrain from engaging too much with financial news or stock tickers. The same holds true for those too easily influenced by a shouting “expert” on TV whose red head caused by an 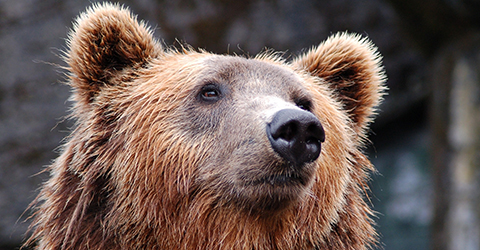 adrenaline rush and his exaggerated excitement is lurking amidst banners of financial news and ticker symbols passing at a speed making it impossible to absorb them no matter how hard you focus.

While it might sometimes be fun to watch these type of shows, only enjoy them if you are able to see them for what they are: entertainment. No one can predict short-term market moves. If you were able to do so, you'd be the real Scrooge McDuck, swimming in money, diving through your golden nuggets.

Currently the market appears to be in a downward swing; maybe the beginning of a bear market, maybe not – who knows? It might simply be another one of the many corrections pushing the markets and the value of your portfolio down 10 or 20% only to come back as quickly as it fell. Every correction, every bear market, throughout history, was followed by an even greater, more impressive upswing.

Short vs. long-term investing in both bear and bull market

For an investor market moods are negligible, short-term moves are what it says on the box: short-term. If you have bought parts of a company that has a solid and healthy business, turn off the TV and enjoy being the owner of a company that will deliver steady returns – whether in the form of dividends or a consistent increase in stock price.

Likewise, if you are short-term oriented, a bull or bear market matter relatively little to your investment approach; in fact, you profit from short-term swings. Also it is slightly more of a gamble than long-term investing, speculating can be fun and be profitable, given that you have a well thought-out contingency plan.

Thus, while investors can sit back and use bear markets to buy more quality shares, short-term investors and speculators can use the swings to make a quick buck and enjoy the adrenaline rush.

Hence, whether you are an investor or a speculator, both bear and bull market offer great opportunities.

Should you consequently worry what a market is called? If you have a strategy, there's no need to give much consideration to what the wider market does.

The bear market is coming, whether it is now, tomorrow, next month or year – that's the nature of the stock market. But just as every bull is accompanied by a bear, no bear shows up without a bull waiting in line to give the party a new boost.