Buying an Apartment - A Real Treasure

Buying an Apartment - A Real Treasure

The time has come for Mrs. Captain Finance and me to take the next step. We have finally found an apartment that we both love and where we can see ourselves live. It is a little gem in the challenging and wide property ocean that is Paris. A gem that is not only architecturally different but also its price.

For quite some time now, we have been looking for an apartment to buy. Just as in many other places, property prices in Paris have gone through the roof and it has become increasingly difficult to buy.

Our current apartment is one of the nicest places I have ever lived in and I love it. The beautiful ceiling with its 19th century decorations, the wooden flooring with its small cracks that give it that awesome antique touch.

We are in the center of everything, shops, bars, restaurants, and friends, all nearby. But the apartment, if it had been for sale, came with an extremely hefty price tag of almost half a million Euros for 48 m2. That is a bit more than we were willing to part with for an apartment to live in. If it had been an investment this would have been a completely different story. But more on that in a later post.

Diving for a treasure

After numerous visits and stressful weeks of looking at every available offer in our price range, we finally found our new home. Although smaller than our current apartment, we now get to enjoy a large backyard – something rare in Paris - making it all the more precious.

Both Mrs. CF and I instantly fell in love as we walked up the wooden staircase embedded between the original stone walls. It even got better as we arrived at the top of the flight of stairs. The estate agent opened the door to a courtyard protected on each side by plants and cute houses. It felt nothing like being in a metropolitan city. It felt like a fairy tale world, relaxing, charming, and secluded. A world far away from the hustle of the Parisian streets.

Across the courtyard stood a beautiful old brick building with endless charm. Our estate agent warned us that the apartment was in a bad state requiring a lot of work. It sounded less like a fairy tale now. These words were too famliar. We had already seen so many apartments that were in need of some work, at least that is what the ads always said. But the work had always turned out to be major and the "apartments" complete dumps and uninhabitable. Could this be the end of yet another dream?  As we walked across the courtyard to the apartment we anticipated the worst.

The estate agent opened the door to the apartment and … we were relieved. This was nothing in comparison to some of the places we had seen before. No ripped out toilets and cables. No mould, no half collapsing walls. This was a hidden gem full of potential. Our estate agent was correct in that a lot of work was needed, but it was all manageable. This place needed love and a few weeks of work to make it our new home. In fact, it was exactly what we had been looking for all along: A project. 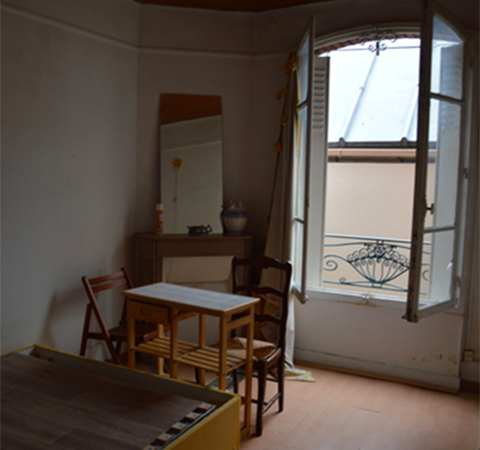 We knew instantly that we wanted to buy the apartment and just as we parted ways, Mrs. CF and I decided to call the estate agent if after some reflection we still felt the same way. And we did. We arranged another appointment only three days later.

In fact, only a few months earlier we had lost out on the exact same apartment after another couple put in an offer. But fortunately for us, her boyfriend left the country for work and they withdrew at the last minute.

On our second visit, my mother in law and I went back to confirm our initial feelings and to hear a third party’s view. This, I think, is one of the most important aspects of buying: Always get someone involved to get a second opinion. Better still if that person is experienced in properties. We wanted to get as much input on the apartment as possible. We took photos and videos and sent it to people knowledgeable in construction and property purchasing. Only when they came back with positive feedback did we think it’d be of any use to visit the apartment a second time.

Particularly, as some cracks in the walls and the state of the floorboard needed closer inspection. And this is the major advantage in getting advice from experienced buyers and builders and going for at least one or two more visits with a third party. It opens your eyes to issues you may have missed.

Thus, after everything in place, we knew that with some muscle, sweat, and materials, this project was a fantastic opportunity. We had found our gem.

Sometimes you just get lucky. We put in an offer the same night only to find out that a few hours later someone else did likewise. Thankfully our estate agent had already passed on our offer to the owner and the apartment is now ours and in full swing of renovation.

I will keep you up to date on the developments and the renovation over the next few weeks.