The larger, the bigger, the better some say. I have learned that the smaller, the better. I am talking about our living spaces: our houses and apartments. If you live in places like New York, Tokyo, or Paris, small spaces are the norm. There is really no alternative. There isn’t enough space and the little space there is, is either already occupied or too expensive for ordinary citizens of the world. In any of the expensive and popular metropolitan areas you are simply not offered much choice.

How highly competitive these markets are for any renter becomes blatant when going for your first viewing. If you are used to spending thirty minutes or an hour visiting a place and asking questions, capital city property viewing is a very different ballgame. You will be rushed through the apartment with big groups of people, as if you were visiting Versailles or running through the Metropolitan Museum. But while there you’d be amongst thousands of others who quickly want to get a glimpse of history and art, viewing an apartment is about finding an appropriate living space for the next years. Worse even: after a rather unpleasant experience that feels more like a job interview you are more likely than not never going to hear again from the agent or owner as nice properties are snapped up within minutes.

What is the norm in New York, Tokyo, London or Paris has people’s jaws drop elsewhere. On a recent trip to the city of Stuttgart in Germany, home of Porsche and Mercedes, I met a friend for dinner. She was about to upgrade her living space because her 50m2 was rendered too small, particularly with her new boyfriend spending more time at hers. Somehow it felt like a repeating epiphany: We think that we need a lot more than we actually do.

I was no different. The more money I made, the more space I wanted. Strangely enough, the bigger space meant in no shape or form more happiness. I still remember the day when I packed a suitcase to move to the USA and lived out of one single suitcase for months. I never missed anything. What we really need to live happily is relatively little.

Many years later, however, I found myself in a luxury apartment in the city of Birmingham with more space than I could ever make use of as a bachelor – and surely enough I did not.

My bachelor pad was a three bedroom apartment in the city center equipped with the newest gadgets and high-end finishings all around. I worked hard and decided I deserved such a wonderful place. People who visited me frequently commented on how nice it was only to follow up the compliment with a surprised remark: “You’ve hardly got any furniture. It looks a bit empty?”

They were right. It did look empty. The largest room of my apartment was never used. The only pieces of furniture were a small table, two chairs, and a convertible sofa bed. I didn’t even bother heating it. I only passed it on my way to the kitchen. However, it made for a great guest room. With friends staying at mine about once a week, it did indeed come to good use. On those nights I would undoubtedly turn the cold space into a cozy, warm place for friends to feel comfortable, but on any other day and night it was an unused 20m2.

That young boy who had moved to the States with only a suitcase was still happy with few material possessions clogging up his living space. You might think that’s extreme, but it somehow felt freeing not to fill my life with unnecessary unused items.

Upon arrival in France, I rented a similar apartment: over € 1,000 every month excluding bills. Only for the pleasure of living in a luxurious apartment complex, surrounded by neighbors with BMWs, Porsches, and Audis. An elevator taking me directly from the garage to my apartment, a big balcony, and a fully equipped brand new kitchen. All that for "only" € 12,000 in annual rent; or to put it differently, the down payment on a property or the price of a city car.

Yet, despite living in such a luxurious place, I again opted for very little furniture. It was a friend’s persistence that persuaded me to exchange my small Turkish stool for a big couch to fill up the space. I had six IKEA chairs to welcome guests and a garden table on my balcony for BBQs, but inside the apartment was a rather empty shell. I was very happy to not be overwhelmed – at least this is how I have always felt – by too many chairs, tables, and other possessions that would take up space and add so little to my wellbeing. Often did I think when traveling for work that the size of a hotel room would almost suffice: a comfortable bed, a desk, a chair, and a wardrobe. Truth be told, it probably would not as I love spending time with friends and enjoying dinners and as such would probably have needed just a tiny bit more space.

Paris’ calling and the reality of small living

Some years later, after meeting Mrs. CF and deciding to live together in Paris, it was time to find an appropriate apartment. As anyone looking for an apartment in a big city can attest, it is a real challenge and takes a lot of research and time. More often than not, you’re confronted with properties that are far from livable in or tremendously overpriced, or even both. So after months of searching, Mrs. CF told me that she had good and bad news. The good news was she had found a place, the bad news it was only 48m2 (517 square foot).

“But for Paris that is quite big,” she said, “You cannot have your 70 or more square meters in Paris, unless you are paying thousands.”

In life there are certain things that we simply need to accept as reality and this one was one of them. Neither of us was prepared to spend thousands on an apartment. The aim was to live well, in the city center to be close to bars, restaurants, friends, city life, and be able to save money to buy an apartment in a few years. As so often with life’s events, things turn out for the better. The apartment was a real gem: it had more charm than any of the two luxury apartments I had lived in before – indeed upon leaving the apartment after a couple of years I was, for the first time, sad to move out. 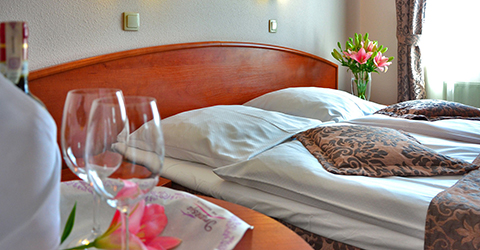 In the apartments before the ceilings were brand new, sleek and white, now they were original French ceiling moldings from 1896. The parquet creaking as feet tapped on them with little gaps between the original boards. It was the Paris living you’d see in films such as Midnight in Paris. Before I had lived in luxury, now I lived in beauty.

The advantages of living in a smaller space

That beauty also came with great advantages. Besides the obvious, such as a lot less time wasted on cleaning the apartment, it also gave us the opportunity to declutter our lives. Transitioning from two apartments to one helps to get rid of unwanted and unused items. Moving from over 100 m2 (1077 ft2) (combining our two individual apartments) to 48 m2 (517 ft2) is a fantastic way of sorting out what is really needed and what simply takes up space. Some things I had entirely forgotten about and these were things that no longer found a place in our new apartment.

Apart from decluttering and simplifying your life, smaller spaces have major financial advantages. Starting with lower bills to lower taxes. But let’s start with the latter as it is the most irritating expense, as it adds relatively little to your living standard. Council tax for my luxury apartment was over € 1,000. Adding the council tax Mrs. CF had to pay, we looked at a total of over € 1,500 for the two apartments, or 100 m2. Now, with half the space we looked at less than half that amount. For our apartment in Paris, we paid, in comparison, a meager €500 annually.

Even more impressive the savings regarding our electricity bills. Heating a larger space is obviously a lot more expensive. In fact, I paid almost € 100 per month in electricity. That is in spite of the fact that I never bothered heating one room. However, as air circulates  and the loss of heat through external walls during winter, the larger the space, the greater the costs. Our electricity bill fell from a combined € 140 to € 45 per month. That is a saving of 68% or in absolute numbers: € 1,140 per year. Adding up only the savings in electricity and the reduction in council tax, the annual savings were a massive € 1,640. That amount pays for a memorable holiday in an exotic country or some sunny, sandy beach.

Another advantage is: the smaller your space, the less will you spend on appliances and furniture. It’s human, or at least rich human’s, nature to fill an available space with as much as we can fit in. Some even own more than they have space for and rent garages, storage space, or keep their valuable, unused items in the basement. As we moved from a much bigger space into a smaller space, we sold furniture that we no longer had space for. In fact, we sold almost everything and bought items that were brand new with the money we made from selling furniture and appliances that we no longer had space for. Now, although we had fewer items, they were all brand new.

So to sum up: smaller spaces are powerful vehicles to save money and declutter your life.

(6) reduces your furniture and appliance expenditures