The subconscious way of becoming rich

The subconscious way of becoming rich

When was the last time you consciously thought about your way back from work? A journey you take almost every day. Do you have to reflect where to go right and on which corner to turn left? Chances are, if you have already driven the same route a number of times it requires no concentration on your part. You simply do it and free up cognitive space for other tasks.

There is a rule in psychology that the more often you do something, the more intrinsic it becomes. Repeating the same action becomes like second nature to you; generally known as a habit or custom. The actions no longer require any effort. Habits are powerful in that they allow us to function without utilizing energy. Most of our daily life is indeed driven by subconscious processes.

Why would I mention psychology and the power of the subconscious when it comes to finances? Because it affects our daily spending and saving habits.

Whether it is the coffee in the morning, the way we sit at the desk or which sock we first put on when getting dressed, we do it without thinking about it and we do it, because that is what and how we have done things for years. However, there was one day when we decided to behave in a particular way.

Have you ever considered how often you spend € 5 on something that you could easily live without; whether it is cigarettes or the Friday evening taxi ride to and from the bar, although you could have taken the bus or some other means of transport.

Regardless of what the money is spent on, it can be a costly habit. These tiny sums that are frequently spent because it is what we do, can quickly add up to a small fortune. If you were to put them in a jar rather than spending them, you’d find it filled to the brink after a few weeks.

Just as our spending habits are formed by our history and decisions we have taken a long time ago so are our saving patterns. Some are big savers, others save very little or nothing.

Imagine that one day you decided that instead of taking the car in the morning, you’d take the train to work; it would change your morning pattern. You might have to put on a different coat to protect yourself from the morning cold on your way to the train or get up a bit earlier, but it might save you the hassle of the annoying traffic jam you usually find yourself stuck in. Or if you decided to take a different route home after work, you’d have to put greater thought into your new journey to not end up on the same roads as you had done for many years prior. However, after a couple of weeks the new journey and putting on a different coat have become your new normality.

The same applies to saving. The more often we put aside a specific sum, the more it becomes a habit. Eventually not doing so will feel wrong and only when we adhere to our subconscious norm will we feel comfortable. Repetition is an easy way to becoming rich. Just like repeating a particular action to improve your skills in sports or art, repeating the same behavior and learning from those that have not worked is the easiest and most effective way to build a stash of money.

Take for instance a sum like € 150. It is not too difficult to set aside and yet only so few do it. Why so few do is potentially due to a misperception of the awesomeness of smaller sums. Our thinking pattern tells us that taking the car in the morning is more comfortable than taking the train although the train might be more relaxing than being stuck in a traffic jam. The same applies to small sums: We too easily perceive them as, well, too small sums to really make an impact on our lives. In addition, it takes a conscious effort to save even the smallest sum. And it is true: On their own these small sums are nothing but small. But if you think of them as soldiers, a single one might appear rather weak, but as an army they become extremely powerful.

Still smaller sums appear even less significant. Our habit forces us to take the car in the morning and unnecessarily waste endless liters of fuel while stuck in traffic instead of taking the train and reading a book while someone else does the driving for us. We too easily fall victim to our yearlong life patterns without ever questioning them. But as we are intelligent human beings, we are able to break patterns and alter our subconscious.

Understanding the power of the subconscious in our daily life can help us to alter our spending and saving habits and turn what at first may seem life a sacrifice into a new, effortless norm.

If we make it our pattern to save € 150 per month, the behavior will soon become the norm. This is where breaking a habit and adopting a new one suddenly adds to your wealth. The € 150 on their own do indeed not make any difference to your wealth, but by making saving that sum a habit, you quickly build an army of cash. If you saved or invested that tiny amount each month at 4% interest you will, 10 years later, be over € 22,000 better off. Over € 4,000 of that are due to the compound interest your new habit has earned you.

Below is a table to demonstrate the power of regular savings and interest:

Even as little as € 150 will create a massive stash of € 22,004 after 10 years. That is a few cheaper nights out, using the car a bit less, cutting back on takeaways, lowering the heating in your home by a couple of degrees, reducing the A/C use. There are numerous habits that can slightly be altered and allow you to easily save € 150 per month.

By breaking your thinking pattern that small sums are negligible, they will add € 4,004 in interest to your wealth. That is 18% of your fortune (€4,004 of € 22,004) created without you having to lift a finger, as your subconscious has done the initial work and the money has in the form of those tiny sums have done the rest.

Saving € 500 per month is an entirely different ballgame. Not only do you end up with € 73,348 after 10 years, but the 18% productivity level of your employees created a massive € 13,348 in interest alone. That must certainly be worth cutting your expenses for.

If you have even more spare cash, € 1,500 per month will leave you € 220,044 better off. This is certainly worth saving for. Better still, you have earned many people's annual salaries without having to work for it. Thank you subconscious.

Next time you feel like something is a drag, remember, repetition makes masters, repetition creates wealth, the power of you subconscious can not only free up cognitive space but also make you very rich. 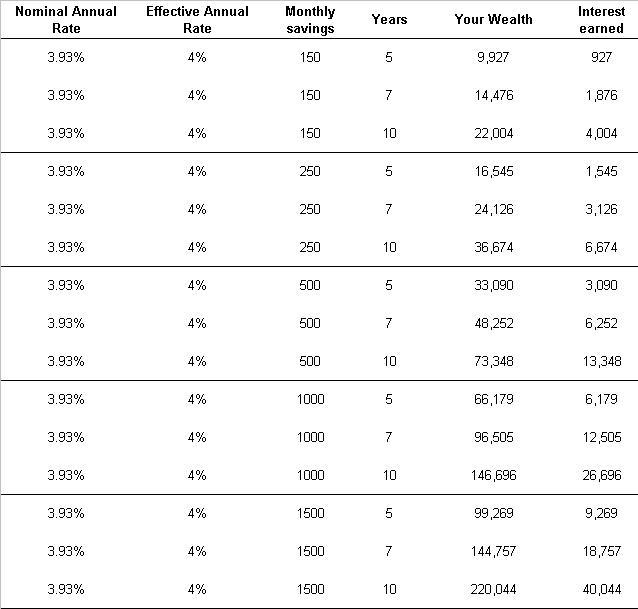