Taking a loss to make a gain

Taking a loss to make a gain

A few years ago, just after moving to France, I invested in one of their corporate powerhouses. While I anticipated no great gains from the investments, I made the choice to invest € 10,000 in the company for another reason: dividends. Within only a few months, however, I had lost € 5,600. The company I bought was, and still is, one the biggest global telecommunication companies, France Telecom. Did I anticipate a loss of over 50% of my initial investment? No. Was I bothered about losing all that money? No. While not an exciting investment with great growth potential, France Telecom, or Orange as they are now called made a fantastic announcement: a whopping 8% guaranteed dividend return for the following three years. The steady return was worth taking a shot. The sound of their dividend was like Christmas bells in my ears: their guaranteed return was about 4 times as high as what, for instance, a savings account would have paid.

But rewind a few years: Since the global markets collapsed in 2009, we have been living in times of miniscule interest rates. 8% return … a dream. However, there is no such thing as a free lunch, as they say in banking. The chance of such a great return comes at a price – risk. However, after weighing the pros versus the cons, I decided to move forward and buy shares. One of the pros: the risk was minimal; this company was simply too big to fail. Heard that before, right?

I thought: If this company fails, France will tumble as well. After all, would the government abandon a company they are a major shareholder in? France Telecom was, and still is in theory, a partial government entity given the 25% share owned by the French government. But even if you have one of the richest governments behind a company doesn’t mean that stock market participants view it similarly positively.

Five months after I had bought the shares, their price plummeted and I saw my hard earned money dissolve right in front of my eyes; over half of the money I had invested.

We have all heard of people telling horror stories about their uncle or aunt, some friend of a friend, or a colleague who has lost all of their savings in the stock market. Yes, it does happen; but it happens for a reason: a too risky investment, a “fantastic stock tip” (think Wolf of Wall Street), some closed fund rendering it impossible to withdraw your money. These stories usually have something in common: the colleague’s decision to put his hard-earned money into a penny stock, the aunt’s decisions to follow her manager’s recommendation to buy this ‘awfully fantastic’ fund their bank has recently created, or the quick money maker seemingly too good to miss. All these are risky and get it quick schemes that are what they seem to be: too good to be true.

Rule number two of investing: do your own research.

Rule number three of investing: follow those who are successful.

Rule number five of investing: know your strategy and what type of investor you are.

It is you who is steering the galleon of wealth. It is you who has to be certain where your money can work for the best returns. Thus, due diligence is a must and no tip should be accepted face value.

As I was watching my portfolio shrink, the first dividend payment arrived: a nice € 600 after tax. And even taking into account that I had lost … no wait … I had not lost anything. On paper my shares were worth less than what I had bought them for, but their value can go up or down. It merely depends on what others are willing to pay for my shares at any given time. If I do not like their offer, I am no obliged to accept it and will simply wait for someone to up the offer to a level I am happy with. It’s no different from selling anything: you decide whether to part with your property or wait for a better offer. Even though on paper my shares were worth less, they were earning me money. As long as the shares performed in line with my investment strategy – earn an 8% annual dividend – I was not willing to part with them. I was thus not touched by their price fluctuations either way. I had quintessentially earned € 600 (that is a 6% annual return after tax). I had not lost a cent. 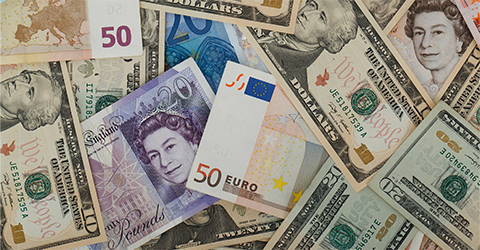 If I had sold that day, my losses would have been more than € 5,000 and the € 600 would have been nothing but a little pain easer. By holding the position, I was sure to receive a nice chunk of extra cash every year for the foreseeable future; particularly as shareholders were guaranteed the same dividend payments for the next two years.

Two years of guaranteed high dividends … two years should indeed allow the share to climb back to the entry price. If not, if the company goes bust, one of the world’s richest countries would also be struggling and we’d be dealing with a very different type of investment world (just think 2008/2009).

The following year I received € 500. The lower dividend payment was due to an increase in taxation of investment gains, but it was still a nice chunk of money.

Four years later, I had not only earned almost € 2,000 in dividend payments (i.e., a total of 20% on my original investment or 5% per annum), but the share price had climbed above the entry level.

If I had sold at any point due to a loss of faith in my initial decision that this share would be a good investment, I would have lost over € 5,000. But that was not what I set out to do: I wanted to earn a good steady return in the form of dividend payments. Share price movements were irrelevant for my goal as long as it would eventually return to par. With an investment horizon of a few years, the share price was irrelevant and in fact allowed me to sleep quite well. As long as the price was to return to my entry price point, I would come out a winner.

Just within a few weeks after the company’s dividend guarantee had come to an end, the price of the shares not only climbed back to their initial level at which I had bought, but a bit above. As they shares had done their deed, I was now ready to cash in and thus sold all shares in the company.  It was a great many years of stable income from dividends and this was the plan from the start.

Whether you are investing in the stock market or properties, patience is the key to success. Fluctuation is part of life and checking the price of your asset constantly and worrying about it, will not aid your long-term goal. If you buy an asset of the above type, stick with it; don’t change your initial opinion just because others have a different opinion on the day. Stick with it and enjoy your well-deserved return.