Mankind’s evolution is mind-blowing. In a relatively short period of time have we managed to evolve to a level so incredible that it would have sounded like science fiction only a few decades ago. Whether we are talking about developments in medicine, technology, or the amazing standards we enjoy today, every generation has becoming richer, healthier, more powerful. Just take the growth of humans in terms of their body height. From 10 cm in the USA to an astonishing 19 for Dutch men.

These issues have become a major part of our modern societies. Life to many feels overwhelming. Endless streams and possibilities to access information, the unlimited choices previous generations would have not even dreamed of available to us today. What should have done us only good has led to an overload of materialistic stimuli, from products to choices, from information to work pressure. Increasing numbers of people seek sanctuary in meditation, yoga, mindfulness to create some space to get away from modern life’s wonders.

We try to buy local produce, head down to the organic shop, downsize our living spaces, declutter our wardrobes and entire houses. We revamp our houses and equip buildings with energy-efficient systems. Urban farming has grown from a niche trend for a few to a mainstream movement supported by governments and corporations. The thought and fell of growing our own food on rooftops and on small green patches in our cities helps us to feel that tiny bit closer to nature.

Across the affluent world the trend is to go back to basics and simplify our lives. Living consciously is the new mantra. Being more considerate and using fewer of our planet’s scarce resources and doing something good for our budgets and personal wellbeing in the process. Increasingly people strive to get away from the advances of the modern world in exchange for a life with a purpose. Rather than evolving further into a direction of speed, more technology, and mass consumerism, we seek alternative life concepts. You just need to look at the number of DIY blogs popping up everywhere. From knitting to building furniture and entire homes, something seems to have slipped and be missing from our overly evolved lives. After my recent trip to Thailand while traveling south to Bangkok on a train I began thinking about all the developments with different eyes.

A train journey through Thailand

Let me start at the beginning, well, exactly right when I started filling a blank page with my thoughts and observations. I was writing these lines while sitting in 3rd class on a Thai train. To my right lay rice fields, bushes, a small creek running along the train line. A farmer tilling his field with a simple wooden hoe – we might call it simple life, to the farmer and those around me, simply life. On my left a very different picture: human advancement. Machines and cranes, teams of workers with modern tools working on the extension of the Bangkok high speed train. Further to the left a multiple-lane highway carrying Japanese and American SUVs, Pick-ups, and Sedans.

Anyone traveling through countries commencing their economic ascend will encounter the same sight: fleets of Japanese, German, British, and American cars, brand new and proudly exhibited by their drivers as they journey through cities and up and down highways. A familiar sight in richer nations, but seeing this tremendous discrepancy between those around me, the farmer on the right, and the incredible wealth and technology in emerging countries is flabbergasting.

As the cars were passing by I looked around at those sharing the train journey with us. Heading south to Bangkok with us was a young couple, a family that had brought their food and beverages in plastic bags, a number of single men and women on their way to the big city for whatever business they had to attend to.

A man sitting by the window on one of the wooden benches somehow stood out: his clothes were evidence of his years of hard labor. His most precious possession appeared to be his plastic band holding together papers, his train ticket, and bank notes. It was his equivalent of a money clip only for it to hold so many more of his valued possessions. On our one hour journey he checked it twice just to make sure that nothing had got lost or fallen out. He minutely flipped through his two inch stack inspecting every piece of paper.

It was the epitome of rich versus poor. For us the journey was an adventure costing us a meager, from our perspective, thirty cents, whilst the fare for this gentleman and the other passengers perchance represented their hourly wage.

The beginning of man

Many of the local passengers brought, along with fruits and nuts the typical Thai meat stick available at every street corner and food markets. Costing only a few Baht (a few cents), these sticks – usually made of chicken – come in all varieties. You can order the same type of stick, but it will taste differently with every vendor you approach. If you are heading to Thailand some time soon, don’t miss out on them, they are delicious. 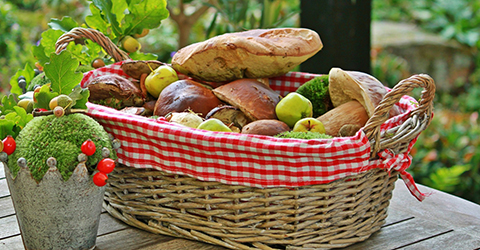 The locals didn’t wrap their food in fancy packaging but simple bags and baskets. Their containers resembled the baskets that can now again be spotted in many metropolitan cities; made of natural materials lasting a lifetime perfect for carrying all types of produce and goods. I remember my grandma always had one of these with her when she went shopping or to the market and as we are moving away from the use of plastic bags, we do likewise as our grandparents.

The difference between the well dressed women and men driving their SUVs and other brand new foreign cars and our fellow passengers was striking: a few items of clothing worn until the end of their day rather the next season, simple containers to carry their food instead of fancy paper and plastic bags, and public transport versus big cars carrying only one person.

The evolution of man in economic terms couldn’t be more prevalent than between the ‘have made its’ and the ‘on my way to a better life’.

The rise to riches

For most living in rich countries the tough and dire times during and after World War II is no more than a distant story. We don’t know scarcity. Our luxurious, safe, and protected ways are nothing but wonderful but to realize and remind ourselves of our luck we do so rarely.

In countries such as Thailand were parts of the population is becoming increasingly wealthy, the desire for the materialistic and luxurious lifestyle we take for granted appears to now be a goal as much as achieving personal happiness.

With wealth have come new SUVs that are a common sight on US roads. Greater financial power equals masses of clothing, many rarely worn, and a desire to display one’s wealth for it being a sign of success and evidence of one’s hard work or in some cases luck.

The richer stop using public transport, dismiss the simple ways of life, accumulate material possessions, and begin to clutter up their homes. Where once a few square meters had sufficed, houses are becoming bigger to store all these possessions. But are we happier for it?

The tipping point – Going back to basics

The question can be answered rather easily. Wherever we look, richer societies yearn for greater simplicity. For decades they have fought to have more only to now want less. While those in poorer countries strive for owning a big luxurious car, more and more in the rich world abstain from buying cars altogether and opt for car sharing, cycling, and public transport.

The rich world, for decades, evolved in ways similar to those of the currently up and coming nations. And while it appears that we have now evolved to levels unimaginable only decades ago, mankind that has evolved too much seeks simplicity. Whether it is in the form of Uber, AirBnB, car sharing, BlaBlaCar, the expansion of rail networks, the race for the use of solar, wind, and hydrogen power, people desire richness in various forms, not just financial, but a richness in experiences and a stronger community. The collective spirit is stronger than ever in its modern materialization, the sharing economy, the desire to declutter one’s house and buy organic, the search for the true meaning of life, downsizing, the tiny house movement, and the increasing success of life coaches are all signs of the tipping point the rich world finds itself after decades of increasing wealth. People are seeking the simplicity and collectivism that surrounds us here in 3rd class on a Thai train: families sharing their foods and close bonds, laughing and interacting with each other rather than staring at their smartphones. They carry only what they deem essential, no extra baggage. Modern society has also opted to rid itself of extra weight realizing that more is not necessarily better.

The rich world is in a way evolving back seeking what is normality in evolving nations. What the rich avoid in emerging economies has become the new trend or necessity in more affluent regions on our planet. Actively protecting the environment and living with less rather than more have become trendy phenomena in Europe, Australia, and North America, a necessity even in cities like Tokyo, Paris, or New York. The little space available has to be used intelligently.

Regardless of whether it is for environmental, financial, or other reasons, it is similar to finding a needle in a hay stay to find someone in a big city that prefers being stuck in traffic over a relaxed journey on a bike, the ability to walk to work, or taking public transport for its affordability and offering the freedom to flee reality by indulging in a book, reading facebook, or listening to music on ones headphones.

The sharing economy has seen such a massive upraise with people’s perception of what they really need, that sharing, whether un- or intentionally, allows us to protect our planet and enable more people to enjoy a flexibility and freedom while saving money by, for instance, using AirBnB or car sharing services. I for one love BlaBlaCar. I guess, the richer we become, the more we become like our fellow passengers on this 3rd class carriage in Thailand: We seek simplicity, comfort, a spirit of community, and want to enjoy nature in its true form.

Maybe the evolution of man is nothing but a circle. A loop that takes us from the most basic, simple forms of life for those less affluent to an extremely advanced, complex stage before returning to a conscious choice for simplicity to allow us to reconnect with the world around us and make sense of who we are.

Major thankies for the

Major thankies for the article post.Much thanks again. Fantastic. Goudge